Home >> Dell and their Random Prices

Dell and their Random Prices

I know Dell get a lot of stick for their customer service and a load of other stuff. I must admit I like Dell and I have always had good support from them, but I do have a bugbear with the fact that Dell’s are difficult to expand, as they seem to remove extra slots from the mother board.

Anyway, onto to real reason for this post. Over time I have decided to look at the many special offers on Dell. Some seem really good. But Dell have this habit of saying one thing at the beginning of the transaction and for some unknown reason they switch the prices around. So what you thought was a great deal on page 1, then flips back to the original price on the second page. After Going through this many times on different offers I find out that the savings were added right at the very end, just before putting your credit car details in!

So I thought I would try and find one to show you. Whilst not strictly the same shows the loony things that Dell do.

Image 1 shows the price down from 719 to 599, that’s sterling btw. So by progressing to the next page you see I got presented with a different price. A considerably different £860 down to £740. WTF! The discounted price I am now being told is more than the price I was originally told. 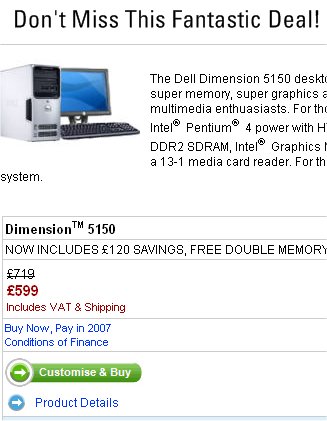 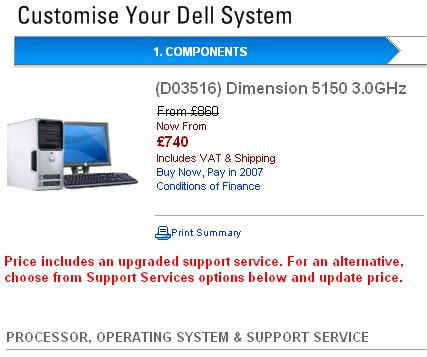 So lets take it one stage further. Image three is the first time I am given the opportunity to add to the basket. OK, most people would want to do some customising, but still missing a call to action in my book. 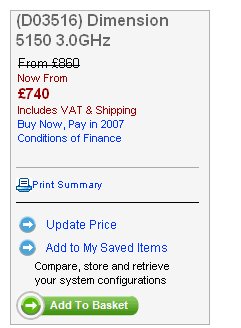 So lets look at the last but on stage, which is shown in image four, which has the price breakdown. I see a grand total of £739.99. So more than what I was told originally on the first page of the Dell site. But wait just a god damn minute, there is a delivery charge shown on the bill, £60. You lying bastards, you said it includes “Vat and Shipping”. So not only does it look like I will pay more for the actual goods, I also get to pay for something that you said was free!!. 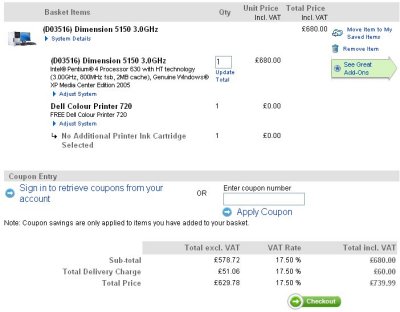 Sorry Dell, you have lost me and I know of more than 5 person mates who have baulked well before this last stage when your site started giving different values to what you stated.

At this point I don’t trust Dell to have the correct prices!. So I wont even bother looking at the need to create and account with Dell!