Well I am sure you all know JasonD or have seen him about, if not check out an interview I did with him a while back ….JasonD Interview.

Anyway Jason now has a blog of sorts. Weird mental colours and fonts, but Jason never likes to conform.

Check is out…. Jason’s Shell

Oh, happy day, Google have been granted a patent on web link spam.  Right, Bill may say it better, and may even look over the maths, but in very rough terms, I think the patent says this :

A site may seek to improve it’s apparent importance by acquiring spammy links. This can sometimes be detected by examining the derivative graph of average PR (NB this is a gross over simplification, but it’ll do) of newly acquired links, since such spammy links often come in 2 varieties :

1) Link farm : often composed of many low PR pages pointing to a single site, hence the graph of d(PR)/dt will be sharply negative

2) Clique attack : often composed of many high value sites linking amongst themselves, but not outside the ring, hence the graph of d(PR)/dt will be sharply positive

Neither behaviour is terribly natural, and can be examined algorithmically. Also, although it’s not clearly stated, there must be a temporal component to this – only links acquired within a given timeframe can truly be considered to be coupled, else madness ensues. Personally, I’d put a damping factor into the coupling that relies on time separation between discovery of various links. It’s known that Google timestamp new links when they find them, so it’s not a problem

Another critical line here “A naturally occurring structure, in contrast, will tend to have more links to nodes outside the ring, thereby dissipating the importance of mutual reinforcement of the links.” – link out from your spam, for protection from detection +3. Fortunately this merely reinforces my own practices, really. I’ve noticed that a lot of “new wave” SEOs think that “PR bleed” is some horrific disease, and not a stupid name for the perfectly normal practice of linking to other people’s sites, like an actual webmaster might do. Repeat after me, hublike score, LocalRank, Hilltop.

Back to the patent… Interestingly, they propose taking the modulus of the normalised derivative value, and comparing that to a threshhold to find candidates for spam status, which may imply that the “natural” graphs of link acquisition vary very little. In clearer terms, that means that you’d expect a site to pick up a mixture of high-value and low-value links, and that the derivate contributions of each of those types of links ought to produce a fairly flat graph overall. That may go some way to explaining why the Digg / SMO boosts don’t always work.

Note that the patent was submitted in 2004 – it’s likely they’ve been using this for a while, and I suspect we’ve all seen the effects. It strikes me most immediately as a huge helping hand to negative SEO – thanks for spelling out more clearly what I need to do to make someone look like a spammer Sepandar D. Kamvar, Taher H. Haveliwala, and Glen M. Jeh. I owe you all a beer.

This analysis was sent to me by my good friend Brendon Scott (Aka TallTroll) who has been involved in SEO for a lifetime. If you can find him maybe you could hire him, a bit like the A Team really.

Richard YoungPosted on February 13, 2009 Posted in For Fun

I was eating out in Enfield, or somewhere near there and found the most unusual constituent of a recipe.

I had to steal it to show it online. Please remember this is an actual menu in an English speaking country.

Check it out (HINT look at the Capesanti) 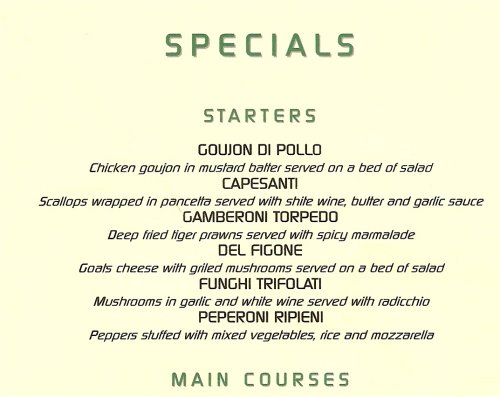 Whilst checking over some questionable sites of mine earlier I found that Google were not allowing me to get to them, coupled with a nice server error that stopped me actually choosing to get the site.

Just in case it gets fixed here are some screen shots: 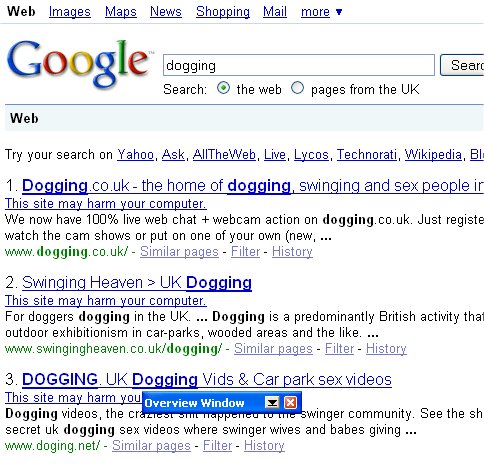 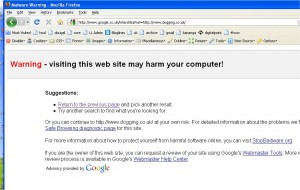 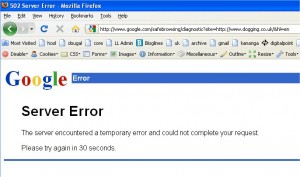 So it appears that Google no longer like “questionable” stuff. This makes a mockery of Google.

Those of you who have been around for a while will likely remember Martin Schaedel, aka lazerzubb.

Sad news, is that he died in a plane crash.

The dude was ahead of his years, he was a bit of a business and web genius at and age when I was still climbing trees and setting fire to things.

Best wishes to all his friends and family.

I don’t have a lot of time on my hands with all the is going on my end, but I still love to look for new ideas and inspiration…..even if 99% of the time I do FA with the idea.

Shane over at Revenue Addict is one to watch for nice ideas and some useful articles and one that caught my eye and is now firmly on my to read list is Springwise: new business ideas for entrepreneurial minds.

Shane also mentions Tim Ferriss, the author of Four Hour Work Week, which I have recently read and am about reread and make heavy notes. Unlike a lot of self help books this one actually gives examples and a guide on how to go about changing your life with lots of tips from outsourcing to actually deciding what you want to do with your life. Tim Ferris has a blog also.

It’s not on all the time but Dragon’s Den here in the UK is a must, to get ideas from the people asking for funding and in many cases things you should never ever do.

Channel 4 has a series The Secret Millionaire which is fantastic at grounding you and seeing what is wrong with the world and in many cases is just outside your front door.

From a property point of view I like some of the programs like Grand Designs, and Property Ladder.

The Apprentice is always worth a laugh, although it surprises me how flaming stupid some of the people are, like the dude who priced fresh lobsters at £4 each and all his team mates who never questioned this, like they had never seen one on a menu in their entire lives!

Finally getting out there and meeting people in similar games even if just on a social level is a must and very inspiring.

After a quick reconnaissance earlier in the year by Me, Paul and Colin, which was really an excuse to get pissed up in Ireland we decided to leave the main arrangements to Colin to sort, as he is so damn good at that sort of malarky. And sort he did, cheers Col!

All sorts oh Herbert’s attended, from Fatty, NFFC, The Squirrel Boys, lots of great people from the US, including Perk and Vsloath and many more. 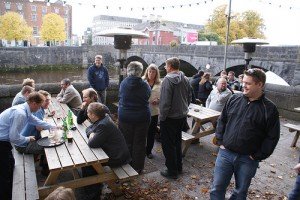 The Usual Suspects braving the daylight

Well it was another good SEO Roadshow turn out, with people who made made the trip across the pond and from various European countries.

Over the course of the weekend we have up to 45(or maybe more) people eating, drinking, talking SEO, bollocks and a whole host of other things

More SEO Roadshow Pictures (not that many though :-))

Ok some may think this is a bit gay, but to them thar nay sayers.. I say “bollocks”.

The wheel of life was described to me last week and that same day I went to the pub (great excuse 🙂 ) to start my ‘wheel of life’.

The process is not very difficult and does not need to be made very complex. By doing it you can see which parts of your life are not as you would like them, and you then set small goals to make each of the areas of your life that much better.

This is how you do your wheel of life (and in turn set goals, feel more confident about negative areas etc etc)

1. Draw a large cross on a page and from the centre outwards on each spoke make ten little marks. Now draw another cross in between the other lines, (45 degrees). For the hard of learning, see completed, made up image below.

2. Create 8 categories that you feel are important to you and assign one to each spoke.

4. Make some brief notes for each spoke, then in detail write down the things that would make that a 10, making the negatives a positive. For example, instead of saying “Never feel lethargic” write “Always feel energetic”, subtle difference but it it works. You will find many things seem to fall in multiple categories (or at least I did)

5. Now you have your list, write a action plan to move each of your scores upwards towards the outside of the wheel. Be specific, these are your life goals, there are likely to be lots and lots.

6. Go do some of the things each day, that should be easier as you now know what it needed as opposed to knowing that something (god know what) is needing to be done.

I hope it works for you, but go on give it a go! 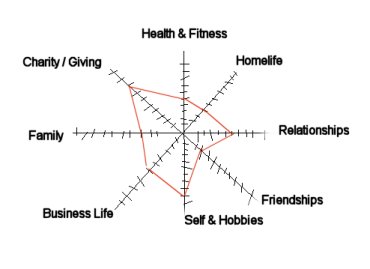 Number 4 is relevant though. But surely they should have this sort of query hand promoted?

I really dont get this one.

Now it has become a test of will, to never sign in again: